“Cortar el bacalao” is the Spanish equivalent of ‘to call the shots‘ – meaning ‘to be in charge‘. However, cortar means ‘to cut’, and bacalao is a fish – cod, in fact – so the expression literally means ‘to cut the cod‘. A variation is “partir el bacalao“, which means essentially the same. 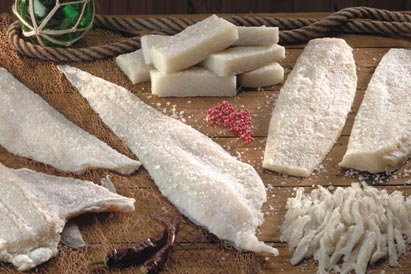 Before refrigerators were invented at the beginning of the 19th century, food was preserved using salt. Salt-cured meat and salted fish were extremely common, and cod was one of the most popular foods conserved in this manner.

In Spain, dried and salted cod first appeared in the regions of Catalonia and the Basque Country, but it quickly became popular throughout the country. Back then, the Spanish Empire had colonies in America and Africa, so dried cod was exported there too.

Slavery was very common in the Spanish New World colonies, where the Spanish exploited indigenous workers. At the end of a long working day, the slaves were asked to stand in line and were each given a piece of dried cod for ‘dinner’. The foreman or plantation manager was in charge of cutting the cod, so he could decide who got a bigger or smaller portion.

Cutting the cod was associated with power, since the person in charge of doing this decided who ate more and who ate less.

Today, salted cod is still a very common dish in Spain – but cutting it is no longer associated with being in charge, of course! The expression, however, is still commonly used.

Can you think of a sentence using the idiom “cortar el bacalao“? Let us know in the comment section below!

Request a catch up class

Reserve your place at this month's conversation class

This will close in 0 seconds